Monte Albán is located in the modern-day Mexican state of Oaxaca. It was constructed ca. 500 BCE by the Zapotec people. The site was planned and strategically set on top of a hilltop, which they leveled, as ceremonial center. It was occupied until ca. 850 CE, when it began to be slowly abandoned, due to widespread drought in the area. 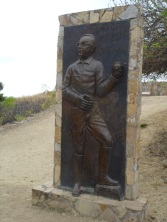 In the 1930s and ‘40s, Alfonso Caso, one of the most influential Mexican archaeologists of the twentieth century, systematically excavated Monte Albán. As part of his excavation, he created detailed cards for the tombs’ artifacts which included the position of these objects within the burial chambers and their measurements. Many of the cards also included photos and drawings of these objects, sometimes including watercolors. The original artifacts were transported to The National Museum of Anthropology in Mexico City, Mexico.  However, the journey in train may have destroyed some of the more fragile items, such as unfired ceramics, that were included as offerings in the tombs.

(Statue of Alfonso Caso at Monte Albán, created by his daughter, Beatriz Caso.)

Our goals for these projects are to recreate Tomb 118 and Tomb 104 and their artifacts excavated and recorded by Alfonso Caso and his team. We want to be able to use the recreation to be able to look at a Zapotec tomb with all of its artifacts placed where they were found. Not only would this help look at the tomb at a brand new way, but also give a chance to interact with artifacts that have been broken or whose colors have faded over time.

We used Cinema 4D and Unity  in recreating Tomb 118 and its artifacts. All photos and videos are taken by us.

Enjoy and explore the site!